Imagine being a child from a poor community.The kinds of communities that lean on the church.Where the preists take on mythical proportions.One day the preist chooses you to serve as an alter boy.Calling it an honour would be an understatement.What a joy it is to be chosen by a man of God.You serve him,you serve God,as an alter boy.Your family is proud of you and your neighbours jealous of your family.One day he summons you to his chambers.You begin to talk about casual church matters.You then notice him slowly unbuckle his belt and it isn’t long before his trunks fall off.He then starts to touch himself slowly in front of you.He looks at you.He points at you with his index finger and signals you to come closer to him.He tells you get on your knees.Terrified and confused,you ask him why.He suddenly takes on a harsh expression  and with a stern tone asks if you dare disobey him,that you dare disobey God.So you get on your knees and he stands above you with his crotch directly in front of your face.He doesn’t need to tell you what to do next.You go home feeling powerless and frightened.You don’t tell your parents because you know they won’t believe you and also because you are not entirely sure of what happened.Your young mind cannot make sense of such an occurrence.So you move on. 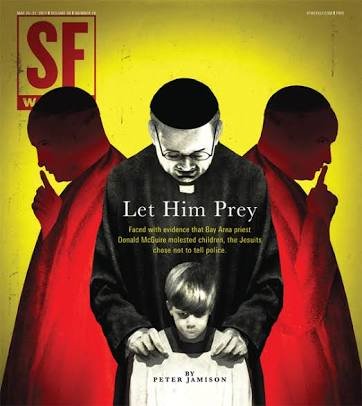 My story seems like an over exaggeration.Like Iam trying to sensationalise a sensitive situation.But unfortunately this story falls in line with the 5500  accounts of reported cases by victims of rape by preists.The church is a place your supposed to feel safe.No not feel safe,be safe.But apparently this place is ground zero for some of the most perverted shit one could Imagine.Ive always been astonished by pedophilia.What is so undeniably irresistible about a 9 year old child?Theyre barely adolescent.The saddest part is that the church spend more time covering this up than punishing the preists.Ive always been against religion,but this dimension makes me outright despise it.

9 thoughts on “Why are so many priests pedophiles?Why is no one doing anything about it?”

This is a text widget. The Text Widget allows you to add text or HTML to your sidebar. You can use a text widget to display text, links, images, HTML, or a combination of these. Edit them in the Widget section of the Customizer.